Aug 28, 2018
Firms Could Lose $17B Due to Online Out-Of-Stock Products
By Chris Campbell 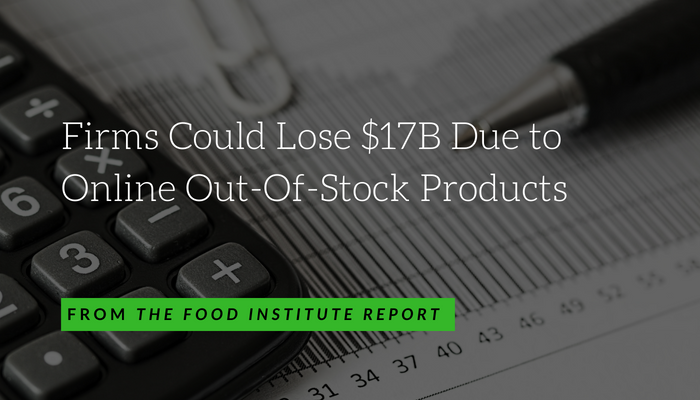 Out-of-stock rates could present a significant challenge for retailers and CPG companies, according to a report from the Grocery Manufacturers Association. Out-of-stock rates for online purchases of consumer products in the U.S. are nearly twice as high as in-store availability, and as a result, potential online sales losses could be as high as $17 billion a year globally.

Of those U.S. shoppers, an item was stated to be out-of-stock about 45% of the time; delayed in delivery or pickup about 27%; not displayed or cannot be found, about 20%, and only available in a brick-and-mortar store, about 5%.

U.S. consumers react differently to online out-of-stocks than out-of-stocks at brick-and-mortar stores. For instance, online shoppers are more likely to remain on the e-commerce website and switch a brand or substitute an item within the brand, which the researchers dubbed “the Amazon effect.” However, if a brick-and-mortar store is out of a product, consumers are more likely to visit another store to find the product.

Specifically, 15% of U.S. shoppers switched online stores to purchase the product they wanted, while 60% purchased a substitute item from the same online retailer. Of the 60%, half switched brands, and the other half found a substitute within the same brand. About 10% of consumers went to a brick-and-mortar retailer to purchase the item, while about 15% indicated they delayed or canceled their purchase.

Online store switching was noticeably higher in other countries than in the U.S., as nearly 25% of international shoppers indicated they purchased the item they wanted from a different online retailer.

French and UK retailers tend to void product pages rather than indicate the product is unavailable. The researchers believe these retailers prefer to avoid time-wasting searches for products that are not available and to avoid reputational damage if stock-outs are signaled.

Omnichannel retailers that pick up online orders in brick-and-mortar stores have more demand variability, since their store inventory must serve both online and brick-and-mortar shoppers. In contrast, pure online retailers only serve online demand and benefit from inventory pooling, since they pick from warehouses that serve larger regions.

Comparing out-of-stock rates by category and country, overall there was less variability among categories than among countries.

In the U.S., only 16% of shoppers indicated a delay in shipping/pickup, which was the lowest of all countries, and 10% found the item can only be purchased at a brick-and-retail store, which was the highest of all countries. Except for Japan, all other countries indicated higher levels of delay than the U.S. Japan has the highest percentage of identified out-of-stock items, while China and the U.S. have the highest percentage of items not being found, at 24% and 26%, respectively.

In 45% of out-of-stock incidents in the U.S., items were stated as out-of-stock, and in another 27%, items had a shipping delay. Combined, shoppers reported the item was found but not currently available in 72% of the cases, while in only 20% of the cases, the item was not found. Researchers say this suggests online shoppers may be more cognizant of stated out-of-stocks than items they cannot find.