Oct 30, 2018
Will This Unusual Allergen Need a Label Disclosure? FDA Wants to Find Out
By Chris Campbell 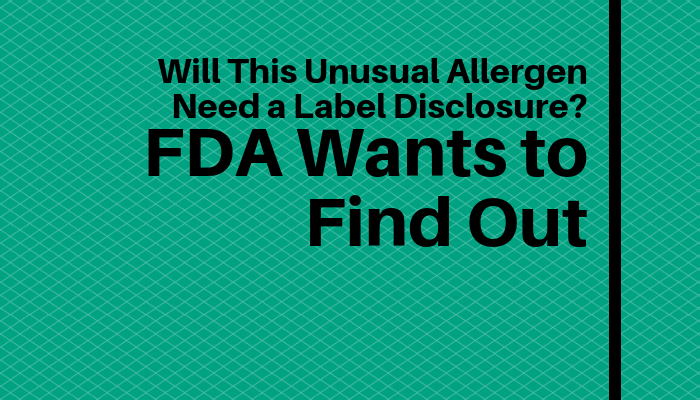 Sesame may become the latest allergen that requires a label disclosure warning on products.

At the least, FDA is interested in determining how much of an issue the ingredient is. The agency will accept public comment until Dec. 31 on the prevalence and severity of sesame allergies in the U.S., and will then use that information to possibly regulate the use of the product through label disclosures.

FDA Commissioner Dr. Scott Gottlieb noted the undeclared presence of allergens in foods, which is the leading reason for food recalls, continues to be a significant public health issue and an area of active policy consideration by the agency. He said "federal law requires that foods containing one of the eight 'major food allergens' – milk, eggs, fish, shellfish, tree nuts, peanuts, wheat and soybeans – declare the food source of the allergen using its common or usual name on food labels," due to the Food Allergen Labeling and Consumer Protection Act, passed in 2004. At the time of the enactment of the law, these eight food groups accounted for 90% of serious food allergic reactions occurring in the U.S.

However, FDA reported it is beginning to see evidence that sesame allergies are a growing concern in the U.S.

"A handful of studies, for example, suggest that the prevalence of sesame allergies in the U.S. is more than 0.1%, on par with allergies to soy and fish. Because sesame is not recognized as a major allergen, right now it's not required to be declared as an allergen on food labels. In fact, it may not always be specifically listed in the ingredient statement," said Dr. Gottlieb.

Products containing 'natural flavors' or 'spices' on the label could contain small to trace amounts of sesame, Dr. Gottlieb continued. Additionally, foods labeled containing 'tahini' could pose a threat to those with a sesame allergy, as tahini is a paste made from sesame seeds.

"Fear of not knowing whether a food contains sesame may lead some people to unnecessarily limit their diets to avoid possible exposure," said Dr. Gottlieb.

Dr. Gottlieb's figures build on existing evidence. Sesame is an important global allergen affecting about 0.1% of the North American population, according to a 2017 report from the National Institutes of Health. When compared to an allergen like peanuts, with a prevalence rate ranging from 1% to 10%, that number may seem small. However, other allergens like wheat (0.6%) and milk (0.8%) are closer to sesame allergy prevalence. Additionally, the prevalence rate is close to soy and fish allergy prevalence.

Sesame is a major cause of anaphylaxis in the Middle East and is the third most common food allergen in Israel. In theory, a mandated allergen label could lower costs for exports of sesame products from the U.S. to Israel.

FDA noted that it was seeking the opinions of epidemiologists, nutritionists, allergy researchers and physicians concerning their clinical experiences and relevant findings for sesame allergies. Additionally, the agency is looking for feedback from the food industry and consumers to help develop a more complete understanding of the risks and to learn more about the potential impact of any future regulatory action that could include new disclosure requirements for sesame.

"In addition to our growing concerns about sesame allergies, this request for information is designed, in part, to help inform our response to a citizen's petition to the FDA from medical professionals and consumer advocacy groups who asked us to require that sesame-based ingredients be listed specifically by name on the ingredient lists of all food labels. We take the concerns of people with sesame allergies seriously," Dr. Gottlieb said.

We may have to wait until 2019 to get a full understanding of how FDA will respond to the citizen's petition, but we know one thing for certain: sesame is clearly on the agency's radar.

In The Food Institute's recent webinar "Achieving a self-sustaining business model: Top 3 trends companies need to think about post-COVID-19," Greg Wank, CPA, CGMA, partner and leader of Anchin's food and beverage group, as well as David Eben founder and CEO of Carrington Farms, discussed how to have a more successful...