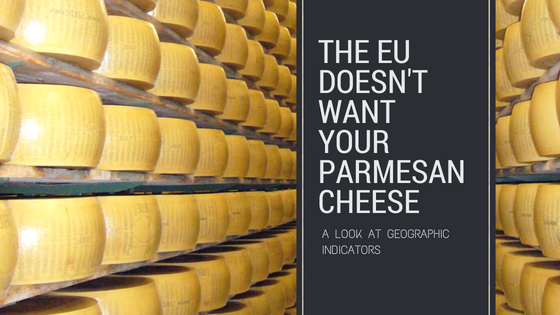 Italy will not ratify the EU's free trade agreement with Canada because it does not ensure sufficient protection for the country's specialty foods, according to the country's agriculture minister. The Comprehensive Economic and Trade Agreement (CETA) will abolish some 98% of customs duties and allow the EU to export more cheese and wine and Canada more pork and beef in quotas that expand over the next six years.

Those numbers, courtesy of Reuters (June 14), are illuminating. These specialty foods Italy is looking to defend are those protected under the country's Protected Designation of Origin (PGO) and Protected Geographical Indication (PGI) markers. These designations are somewhat unfamiliar in the U.S., but are important to the culture and food scene of many other countries, especially Italy. According to the European Commission, "a geographical indication is a distinctive sign used to identify a product as originating in the territory of a particular country, region or locality where its quality, reputation or other characteristic is linked to its geographical origin." It notes these labels create value for local communities and promote rural socio-economic development.

Italy has almost 300 products registered as either PGO, PGI or Traditional Speciality Guaranteed, which refers to a traditional production method or composition of a product, without necessarily being linked to a specific geographical area. It also has another 30 in the works. Its protected products include meats, cheeses, pastas, fruits and vegetables, breads, desserts and more, such as Prosciutto di Parma, Gorgonzola, Fontina, and Parmigiano Reggiano. Of the 28 European Union countries, Italy has the most food products with PDO and PGI labels, while under CETA, Canada has recognized more than 40 Italian PDO and PGI labels.

Since the U.S. doesn't have PGO or PGI products, it may seem like an unnecessary manufacturing and trade barrier, but it is an important quality indicator for many other countries. The EU even plans to expand its geographic indicator rules, asking its trading partners to abide by the EU restrictions in other countries, much like with CETA. Back in February, the EU ran into similar problems in a proposed free trade agreement with Mexico, as both countries clashed over geographical indications versus trademarks, with both having their own protection for the term "manchego," reported Reuters (Feb. 7).

This has led many producers, particularly cheesemakers, to come up with their own trademarked names to avoid violation, reported The Wall Street Journal (May 3). The Sartori Co. cheese factory recently trademarked two new names, “Sartiago” and “Sarmesan,” for export of its Asiago and Parmesan cheese. However, Jeff Schwager, president of the company, notes sales have been slow, as consumers are often confused by the new names. In addition, Arla adopted the name “white cheese” or “salad cheese” for its feta in Europe and other places where the rules apply.

The U.S. Dairy Export Council and the International Dairy Foods Association are trying to contain the expansion of European naming restrictions through lobbying and other efforts. Some cheese makers believe the answer is to develop more original U.S. cheese recipes and "pay tribute to the region where the cheese is being made or the town or the soil," says Heather Engwall, director of marketing at Emmi Roth. Emmi Roth is preparing to launch a new cheese named after the town of Monroe, Wis., home of one of the company's creameries.

While the U.S. is focused on getting rid of geographic indicators and creating its own trademarked products, the problem is likely to only increase, moving into new areas outside of cheese. Back in 2017, Greece’s Ministry of Agriculture set up team to look into Greek yogurt production and apply for "Greek yoghurt" to receive a PDO and PDI. In addition, there were 44 new applications filed with the European Commission in 2018 alone from countries including France, Italy, Greece, Sweden, Germany, Spain.

Consumers are seeking out foods and flavors that bring back fond childhood memories, according to Kroger's Top Five...