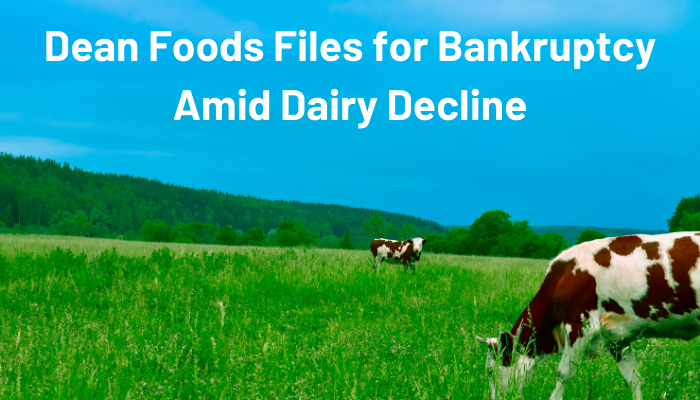 Dean Foods Co. initiated voluntary Chapter 11 bankruptcy proceedings, with the move including substantially all of its subsidiaries.

The company, which includes DairyPure, Land O Lakes and Lehigh Valley Dairy Farms, revealed it was in advanced discussions with Dairy Farmers of America Inc. regarding a potential sale of all its assets.

"Despite our best efforts to make our business more agile and cost-efficient, we continue to be impacted by a challenging operating environment marked by continuing declines in consumer milk consumption," said CEO Eric Beringause.

While the market for plant milk alternatives grows, milk sales were down more than a billion dollars in 2018, according to The Dairy Farmers of America, reported Eater (March 26). The organization attributes the drop in sales to a $1.45 decrease in the average price of milk year-over-year, but it may also point to the rise of milk alternative products at coffee shops and grocery stores.

Options such as nut-based milk, soy milk, oat milk and rice milk are beginning to demand more space on grocery store shelves as consumers turn toward new flavors as well as vegan diets. Sales of nut and plant milks grew by 9% in 2018 and raked in $1.6 billion dollars, according to the Plant Based Foods Association.

Meanwhile, Minnesota and Iowa have lost nearly half their dairy farms in the last 10 years, reported Grand Forks Herald (Nov. 2). Additionally, after 50 years in Rochester, MN, Associated Milk Producers recently revealed it was shutting down its cheese processing plant and cutting 75 jobs.

Sarah Schmidt, VP of public affairs for the New Ulm dairy cooperative, cited numerous hits to the market are driving the change. "Several factors have been really hitting dairy farmers for the past five years—tariffs, definitely trade and weather," she said.

In Vermont, more than 90% of those surveyed in a VPR-Vermont PBS Rural Life Survey said the dairy industry is "somewhat important" or "very important" to the state, yet dozens of farms have gone out of business in recent years. According to the state, Vermont now has 673 dairy farms—a loss of about 100 since 2017.

The dairy industry has shown signs of contention with plant-based milk makers encroaching on the market. Trade groups for the dairy industry are fighting to get FDA to prevent non-dairy options from using the term "milk" on labels. In October, Dean Foods announced it was leaving the International Dairy Foods Association over concerns of how plant-based beverages are labeled, reported Dairy Herd Management (Oct. 17).

In a statement, the company said, “We believe it is wrong that many plant-based products are currently marketed using milk's good name yet are lacking several of the inherent nutrients of their dairy counterparts.”