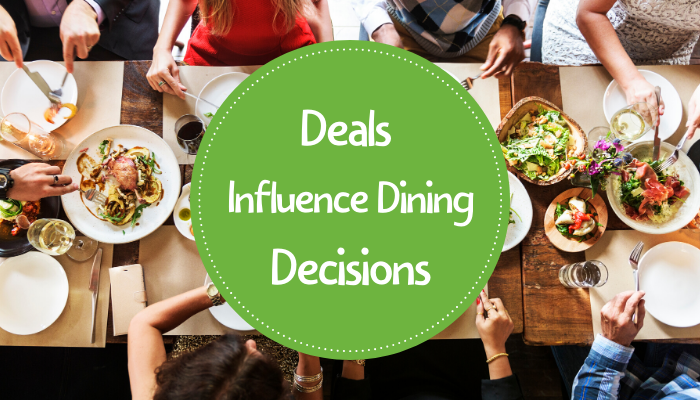 Consumers spend an average of $281 a month eating outside of their homes, according to data from RetailMeNot.

RetailMeNot's 2020 Top 10 Restaurant Marketing Insights report shows that, although busy schedules and hectic lives are often cited as reasons for increased dining out, discounts are driving the trend.

Eighty-five percent of Americans are significantly more likely to have their out-of-home dining choices influenced by a deal or discount than they are by reviewing websites or apps (60%). Additionally, 77% say a deal would make them more likely to choose dining out and, among diners who visit restaurants at least once a week, nearly half would dine out more often if it was easier to find online deals.

"Aside from a great menu, restaurants must add something extra in their marketing recipe to stand out from the crowd and appeal to consumers," said Michelle Skupin, senior director of retail insights at RetailMeNot. "According to RetailMeNot performance data, dining deals result in higher conversion rates, lifts in guest count, and increased ticket values."

According to 85% of consumers, a deal or discount influences where they choose to eat outside of their homes, while 81% say a deal would make them likely to switch restaurants they planned to dine at. Seventy-nine percent would even consider revisiting a restaurant where they had a poor experience if a discount was offered on their next meal.

Websites, apps, and emails help deal-seekers find their next dining out location. Digital content particularly resonates with young diners as 74% of Millennials and Gen Z use websites or apps to specifically search for deals on fast food, compared to 57% of Gen X and Boomers.

Sixty-seven percent of Millennials also report being influenced by digital content from restaurants, and 49% report being swayed by social posts from influencers.

This digital trend can be observed through the popularity of Burger King's Impossible Whopper and Popeye's chicken sandwich, which were both heavily promoted online in 2019. However, as the hype surrounding the products has died down, sales of both items are stabilizing, according to franchisee Carrols Restaurant Group, reported CNBC (Jan. 14).

Despite this, food trends overall play a minimal role in where diners eat. Just 28% of total consumers surveyed reported choosing where to eat out based on the latest trends in food.