Mar 26, 2018
Retailers Beware: the Data-Wakening is Upon Us
By Chris Campbell 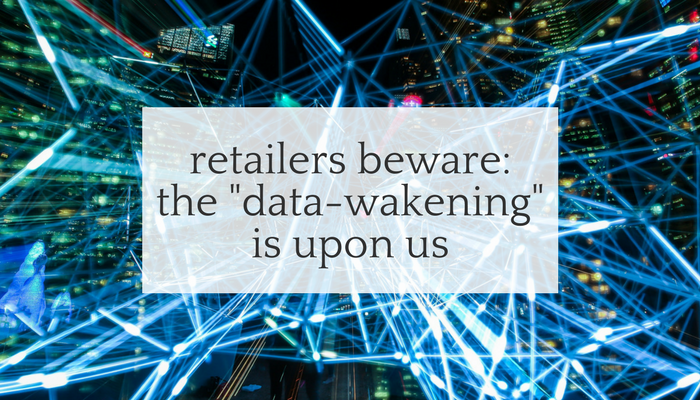 Artificial intelligence, augmented and virtual reality, the Internet of Things, cryptocurrencies, voice assistants, 5G and biometrics: these technological advancements are already available or on the way. Each will affect commerce in their own way, but what each relies upon is rather simple:

For many years, consumers willingly gave their data to retailers in order to receive customized experiences. At the least, many consumers blissfully ignored the fact that companies were receiving personal data about their lives. However, following a recent expose regarding Facebook, most consumers will not be able to turn a blind eye to this paradigm.

For those unaware, it was revealed that Cambridge Analytica was able to download unauthorized data on over 50 million users by abusing the Facebook platform. Predictably, the internet was set ablaze and the #DeleteFacebook movement was born. Perhaps more importantly for social media giant, an FTC probe, numerous lawsuits and invitations to speak before governments across the globe followed, reported NBC News (March 26).

What comes next can be called a "data-wakening," a term eloquently established by VML's Jon Bird in a March 23 Forbes article. Bird notes consumers will become more protective of their personal information, opting to hide as much as they can from retailers and brands. They will seek more control over the data they do share, and will likely abandon companies they believe mishandled such data.

However, as I see it, the food industry is uniquely poised to handle this type of shift. Already, grocery retailers, food manufacturers and foodservice operators need to prove their food is safe and nutritious, and that their facilities are clean. While technology is rapidly changing many industries, augmented reality, robotics and the Internet of Things are just starting to touch the food industry in major ways, giving players in the space the chance to review failures in other industries to prevent them in their own.

As with most things regarding technology, foresight is key. Unfortunately, not every data breach can be predicted, and not every consumer trend can be accounted for. But savvy brands will look to the future by investing in both technology and ethical people to head technology departments to ensure that the human touch is not lost when it comes to handling data.