May 8, 2018
Customer Experience Key for Consumers at Leading Quick-Service Restaurants
By Chris Campbell 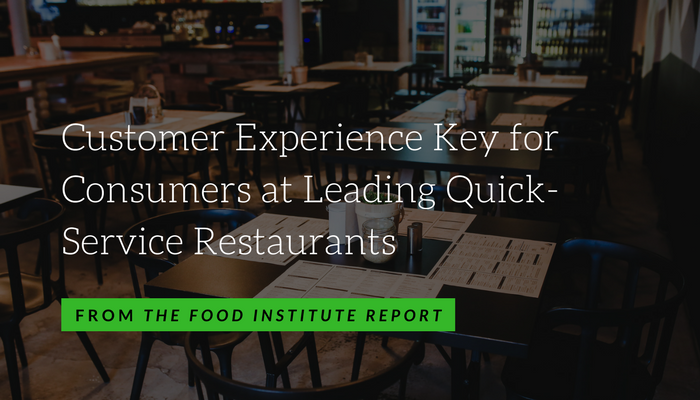 In-N-Out ranked No. 1 among burger chains in Market Force’s 2018 QSR study for the second consecutive year. Burger King, Jack in the Box and McDonald’s ranked lowest in the burger category (despite McDonald’s having the highest mobile app awareness). Of those surveyed, 46% visited a burger fast food or fast casual restaurant at least five times in the past 90 days. Smashburger was found to have the highest awareness for its loyalty program.

In the favorite sandwich category, Wawa rose four spots to unseat Firehouse Subs from the first-place spot, which points to the changing competitive environment for QSRs. This was the first time in the study’s history a convenience store was named the favorite spot to grab a sandwich.

Wawa stood out once again for having the highest mobile app awareness with 67%, up from 48% in 2017.

Chipotle narrowly ranked first in the Mexican chain category for the second consecutive year. El Pollo Loco was second place, while Taco Bell landed at the bottom. Of those surveyed, 37% visited a Mexican QSR chain at least five times in the past 90 days, with 41% dining in during their last visit, and 30% using the drive-thru. Qdoba had the highest awareness of its loyalty program, at 58%.

For best pizza, Pizza Ranch took the top spot, taking the place from Marco’s Pizza. Papa Murphy’s was second place for the second year in a row. Pizza Ranch led in loyalty card awareness, at 90%, and Domino’s mobile app has the highest brand awareness, at 67%. Of the consumers surveyed, takeout, at 55%, remains the most popular way to dine in this category.

Americans’ favorite chicken was Chick-fil-A, at 73%, for the fourth straight year. Raising Cane’s was the second-place winner. Buffalo Wild Wings led in loyalty card awareness, at 44%, while Chick-fil-A and El Pollo Loco were the top two companies for mobile app awareness, at 55% and 45%, respectively. Of those who took part in the study, 31% visited a chicken chain at least five times in the last 90 days.

Technology use by QSR customers to place their orders continues at a steady growth, with 39% reporting that they ordered their meals via smartphone app in the past 90 days. This was a marked increase from 2015, when just 11% reported doing so. Additionally, 28% used a kiosk and 27% used a tablet to place their order, the study found.