Sep 12, 2018
Cranberry Growers See a Light through the Fog of the Bog
By Chris Campbell 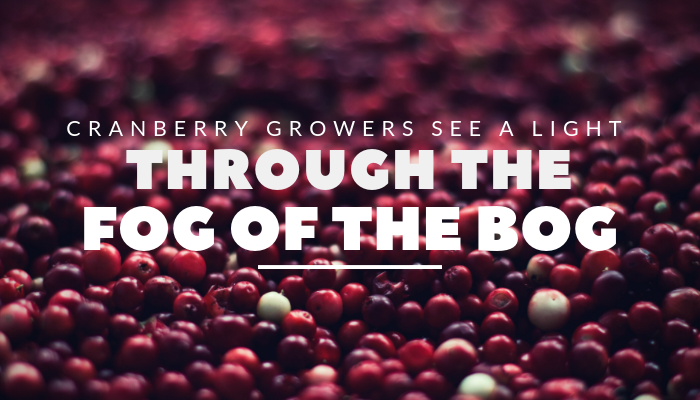 For nearly two decades, cranberry farmers struggled with an oversupply of the fruit, strangling profits from farmers, with many not even making a profit. USDA estimates it costs about $35 to produce a barrel of cranberries, but the average price in 2017 was $31.50, reported U.S. News & World Report (Sept. 4). It doesn't take an economic degree to see that the math doesn't add up, and that was before the current tariff situation.

The EU, Canada, China and Mexico launched retaliatory tariffs on cranberries in the wake of trade negotiations and tariff programs instituted by the U.S. These tariffs have pushed the price of a barrel of cranberries further than 2017 levels, with some reporting sub-$30 pricing. Close to a third of U.S. production is exported annually, and trade groups believe the tariffs would amount to $50 million in an industry that sold about $270 million worth of cranberries in 2017, reported The Wall Street Journal (Aug. 5).

That's why a recent rule published by USDA in Federal Register is so important to the industry.

The rule will allow growers in Massachusetts, Rhode Island, Connecticut, New Jersey, Wisconsin, Michigan, Minnesota, Oregon, Washington and Long Island, NY, to sell only 75% of their historical sales volume, with the balance diverted for a variety of uses. This rule established a marketable quantity of 7.275 million barrels and will allow handlers to process up to 50% of the excess cranberries they receive above their growers' allotment, provided they divert an equivalent amount of 2018-2019 cranberry processed products. Donations to food banks or charities, usage as a soil amendment or to expand under-developed foreign markets are among the diversions suggested by the agency.

Although welcome news for an industry that is just ramping up for harvest, some lamented the delay USDA took during the rulemaking process. "From our perspective, the delay in their decision making was frustrating," said Tom Lochner, executive director of the Wisconsin Rapids-based Wisconsin State Cranberry Growers Association, reported The Packer (Sept. 12). Lochner noted that if the decision was made earlier, it could have informed planting decisions earlier in the year.

However, the rule will certainly make life a bit easier in the meantime. As for long-term improvement, Lochner sees one solution: improve consumption of the berry both at home and abroad. I think we can all help out with that this fall.