Aug 7, 2018
CPG Industry Not Feeling a Boost from Strong Economy
By Chris Campbell 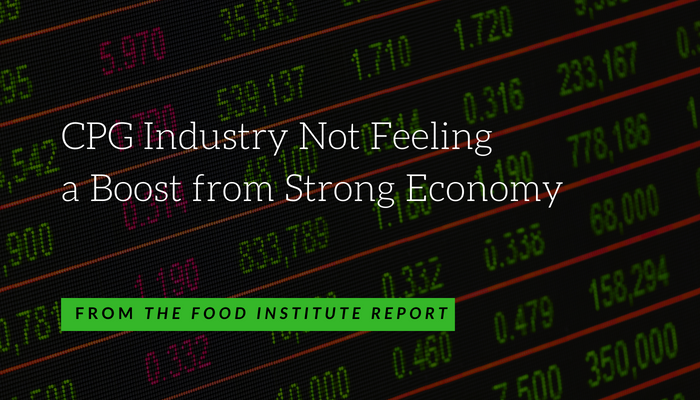 CPG unit sales growth is anemic, despite 55% of households saying their financial health is good, according to IRI's Consumer Connect survey. While consumers are spending more in the healthier economy, they’re selective about what they spend money on and are looking to spend more in non-food aisles.

While grocery trip trends are weak, but largely positive, shoppers’ trips to mass and super stores continue to decline. The dollar sales change in the grocery channel was just a 1% increase in June, and units have been down each month, decreasing 1.5% in June. In grocery, non-edibles saw dollar sales rise just 0.2% in June, while there were significant sales declines each month, decreasing 2.4% in June, according to IRI’s Market Advantage survey.

Consumers’ price consciousness can be seen in the 61% of consumers who buy in bulk for a lower price per serving/usage, as well as the 59% who generally purchase the lowest-price option when buying groceries, up just 1 percentage point from 2017, according to the Consumer Connect report.

Store selection considerations are rated similarly across income levels. For instance, 90% of households who make more than $100,000 look for a store that allows them to fill their basic needs at the lowest possible cost, while 96% of those who make less than $35,000 feel that way.

Besides value, grocers can attract shoppers with good use of technology and e-commerce options. While 38% of total shoppers look for technology that makes shopping at a store more exciting, the same percentage want online purchasing with fast delivery, and 31% want the option to order online and pick-up in store when selecting a grocery store.

In addition, households with kids are more swayed by technology that brings excitement and convenience, at 44%, while 34% of households without kids look for that.

Despite the weak CPG sales growth, premium brands are a good opportunity for grocers over the longer term, as 30% of total shoppers expect to purchase more premium products in the next six months, compared with 39% of shoppers with a household income of more than $100,000. In addition, 31% of households without kids expect to purchase more premium brands during the next six months.