Jun 13, 2018
When it Comes to Labeling, COOL is No Longer the Rule
By Chris Campbell 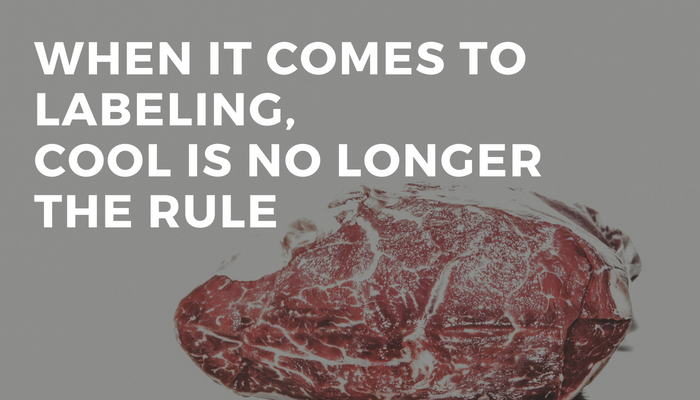 Country of Origin Labeling (COOL) will not be reinstated in the U.S., according to a judgment from the U.S. District Court Eastern District of Washington issued June 5, despite the court's acknowledgement that the removal of the labeling law caused red meat producers in the U.S. harm.

In the summary judgment, the court agreed with the plaintiffs' argument that the rule caused financial harm and that they suffered losses due to the rule. However, USDA successfully argued that the challenge to the regulations was time-barred due to a six-year Administrative Procedure Act statute of limitations. The plaintiffs argued the 2016 law was what was being challenged.

"While obviously disappointing, the outcome of this case highlights the urgent need for the new administration and new Congress to reverse the harm to U.S. cattle producers brought about by the actions of the previous administration and Congress," said R-CALF USA CEO Bill Bullard, reported The Fence Post (June 6).

USDA discontinued enforcement of COOL requirements for beef and pork products Dec. 21, 2015, under orders from USDA Secretary Tom Vilsack. The decision was made following a World Trade Organization (WTO) ruling that Canada and Mexico could impose more than $1 billion in tariffs on U.S. products due to the harm COOL was creating for the two countries.

So, while COOL may no longer be the rule, the question becomes how long?

Many ranchers noted they will ask the Trump administration and Congress to reinstate COOL following the lawsuit, reported Capital Press (June 11). They argue that the tariffs are hurting American consumers the most, and with proof that the court found the rule had caused producers harm, they feel they have a leg to stand on in further regulatory actions.

"That is a huge piece of evidence that we now need to take to the administration and to Congress in an attempt to reinstate (COOL) through either executive order or congressional enactment," Bullard said. "The case has served its purpose to create awareness for the problems associated with the lack of labeling on imported beef."

"President Trump now has the opportunity to immediately reinstate COOL in his ongoing renegotiation of NAFTA as well as by initiating a rulemaking within USDA to require imported beef to bear its foreign marking through retail sale, just as the COOL rule effectively did from 2009 through 2015," Bullard added.

Should Congress or the Trump administration decide to pursue such action, it would likely complicate the evolving tariff situation across the globe. With many U.S. trading partners instituting or threatening retaliatory tariffs due to recently-imposed U.S. sanctions, COOL could provide another avenue for global trading partners to sanction the U.S. Considering the COOL rule was originally repealed following a $1 billion judgment from the WTO, it seems likely follow-up judgments would be issued by the international trading body.

Despite the international consequences, however, consumers will likely determine the verdict in the court of public opinion.

"The place where this thing will be won or lost is with consumers. We're on the same side as consumers … wanting to know where their food comes from. That movement is going to continue to get traction," said Scott Nielsen, president of Cattle Producers of Washington.

Four years before COVID, a market analysis report by Grand View Research predicted the global food robotics market would attain a value of...