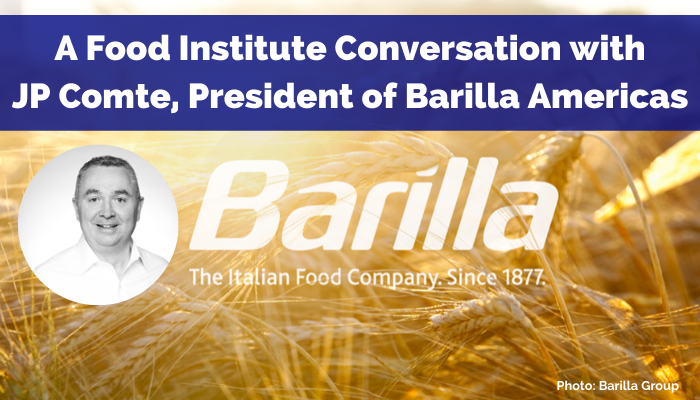 In the first Food Institute Leadership Series conversation, we spoke with Barilla’s JP Comte on the following topics:

In his current role, JP Comte is responsible for the North and South America operations of one of the world’s largest Italian food companies. Comte has almost 30 years global experience in the fast moving consumer goods industry, which began at Procter & Gamble where he held positions in sales, marketing, and general management. Through his increasing responsibilities at P&G, he was relocated from his native France to Italy and Switzerland.

Comte joined Barilla in March 2010, where he was VP in charge of Western Europe before relocating to Chicago in Sept. 2013.

Today, Barilla has net sales of over 3.6 billion euros, with operations in Italy, Europe, Americas, Asia, Africa, and Australia. Created in 1877 in Italy, the company is still family owned in its fourth generation.

Barilla is concentrated in Europe with nearly 70% of its revenue coming from the region, while North and South America is the second largest at 20%. The fastest growing regions include the Americas, Asia, Africa, and Australia—in terms of net growth.

According to Comte, the mission of the company is to bring “joyful, wholesome, and honest food to the world.” Barilla leverages its Italian roots to create food that is healthier and more nutritious.

Comte noted that in the U.S. people love pasta, but due to cooking skills or lack of time there is a huge opportunity in the convenience space, which is a key area of innovation at the company.

More than three years ago, Barilla came to the America market with Ready Pasta. Ready Pasta is pre-cooked, pre-salted pasta in a pouch that consumers can microwave for 60 seconds.Similar to other Barilla products, there are still no preservatives or GMOs.

Another area of innovation has been dry pasta made from legume flour, such as chickpea or red lentil. This pasta answers the consumer need for sources of lean proteins, as well as those looking for plant-based, gluten-free options.

From concept to market, the length of new product development varies by each product, according to Comte. Some take more than a couple years, while Ready Pasta took about 16 to 18 months.

Barilla also aims to innovate beyond products. The company has two restaurants in the U.S.—one in Orange County and one in New York. Comte said they connect “very closely with the consumers of these markets.”

The year 2020 will likely be remembered as one of the most devastating and volatile years in recent history, with the economic impact of coronavirus and the cultural impact of the social justice movement.

Specifically regarding COVID-19, Comte noted certain lessons learned, one being related to the shifts across channels, or the way people shop. “What we saw in the last three to four months is that, for necessity, families and people were back home and had to cook from home,” said Comte, “We were fortunate enough to be in categories of products that are considered essentials for American consumers.” He noted that the company saw many social media posts of pasta meals using their products.

“It goes beyond the fact that pasta is an easy and safe meal, it’s also the perfect meal to express creativity as a human being…one of the only ways to express oneself was to go into the kitchen,” said Comte. “We saw that this way of being back in the kitchen together strengthens emotional links between families, which is also an emotional benefit.”

In terms of employees, the company had fairly flexible work arrangements, said Comte. “We learned a lot from working from home,” he said, adding the company was able to use remote access quite efficiently.

As an Italy-based company, Barilla knew not to take COVID lightly early on, with Comte noting they were probably more prepared than other companies. In Barilla’s two U.S. facilities, only one case of the virus has been reported thus far.

On the social justice side, Barilla developed an action plan. It includes four pillars: education, amplifying support to NGOs in the space of good and healthy food access (such as Urban Growers Collective in Chicago), using key performance indicators (such as pay equality and representation), and lastly to communicate.

What Food Companies Need to Focus On

After going through one of the longest bull markets in history, many food and beverage companies are now struggling in the current environment. As someone who has been though several business cycles and crisis, Comte noted that the top thing food and beverage executives need to be thinking about entering the second half of 2020 is how to contribute to repair or improve the food system.

“This pandemic has emphasized the fact that one of the biggest inequalities today is access to healthy food,” said Comte, adding that the food industry should continue to work hard to provide the American population food that is healthier and more nutritious. “I feel very good working for a company that puts this at the center,” he said.

What Makes an Effective Leader?

What company leaders are experiencing in 2020 is unprecedented. Comte believes several factors will make an efficient leader, one being the ability to promote diversity and make the workplace as inclusive as possible. “The more diverse the voices in your company, the better for your business,” he said.