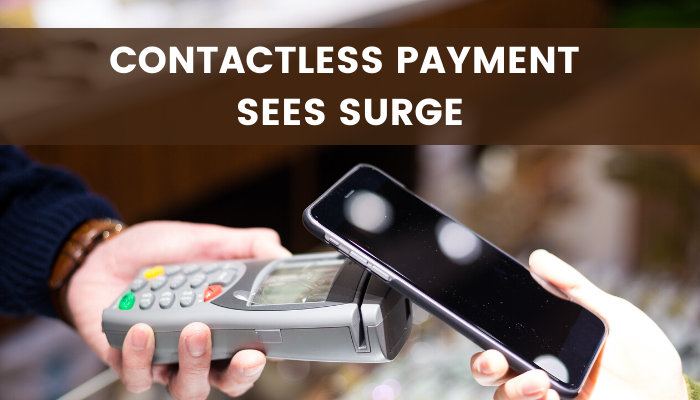 Contactless payment, which once struggled to catch on in the U.S., is on the rise as people worry about catching coronavirus from touching cash and credit card terminals, reported The Seattle Times (April 19).

Crone anticipates contactless payments to receive an additional 10% to 20% of transactions at stores and ATMS and that person-to-person services like PayPal, Venmo, and Zelle to benefit as well. The Treasury Department may even let people who don't have bank accounts receive relief checks via these services. PayPayl said it is allowing people to receive stimulus checks through its namesake service and is testing it on Venmo.

At Zelle, users have been sending money to others for prescriptions and groceries, according to spokesperson Meghan Fintland. Some are buying items in bulk for their neighborhoods and then using Zelle to be paid back, while others are sending cash gifts to relatives for special occasions like birthdays.

"People don't want to handle cash, especially at this time, so they are looking to mobile payments as the best alternatives," Fintland said.

Twenty-seven percent of small businesses in the U.S have experienced an increase in customers using services like Apple Pay, according to a survey from Strawhecker Group and the Electronic Transactions Association. Publix Super Markets fast-tracked its transition to contactless terminals because of the virus. Since the beginning of April, customers have been using services like Apple Pay and Google Pay to check out.

"I know a lot of merchants are putting up signage at the point of sale, 'Please use contactless,'" said Linda Kirkpatrick, a Mastercard executive who works with banks and credit unions.

Walmart recently changed its self-checkout system to go completely contactless when shoppers use Walmart Pay. Instead of touching a "pay now" button after scanning items, shoppers can now simply read a QR code with their phones to pay. "You are seeing customers start to use services they weren't interested in before," said Molly Blakeman a Walmart spokeswoman.

The company added a grocery delivery service in Washington, DC, in late March and expanded to Irvine, CA. It also expanded its service area in Milton Keynes, UK, where it has been operating since 2018. Starship plans to add more cities in the coming weeks.

"The demand for contactless delivery has expanded exponentially in recent weeks," Ryan Tuohy, who heads up business development at Starship Technologies.

Contactless payment is also rising in foodservice, as delivery services began offering options for contactless delivery. In March, Burger King even released a commercial to encourage customers to use an order-ahead app to pay at drive-thrus.