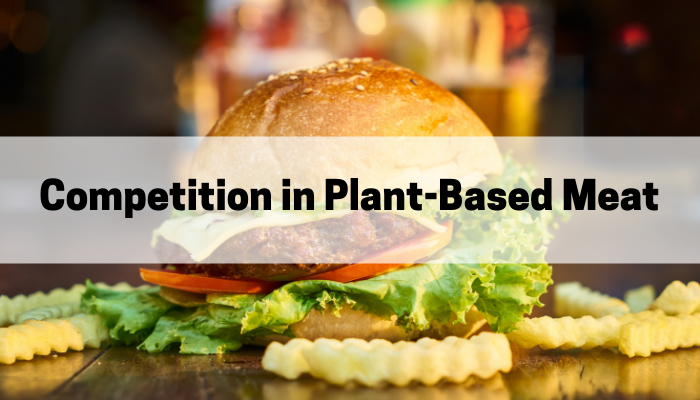 The big players in the plant-based meat sector could have new competition.

Kellogg Company could emerge as a larger threat to companies such as Beyond Meat Inc. and Impossible Foods Inc., according to a Piper Jaffray analyst, reported Bloomberg (Aug. 20).

MorningStar Farms, Kellogg's division for plant-based foods, could offer innovation that is fresh, refrigerated, better tasting, or branded in an updated way. It already claims to be Americas number one veggie burger brand.

The analyst, Michael Lavery, estimates the unit could be worth $3 billion, which would increase Kellogg's enterprise value to $33 billion.

Lavery is not the only one who feels this way. In July, Barron's (July 4) reported the company is "sitting on a fake meat' gold mine bigger than Beyond Meat," estimating MorningStar could be valued at $5 billion to $10 billion in a spin-off.

When Barron's asked Sara Young, one of the Kellogg executives running MorningStar Farms, if an IPO is on the cards she replied, "not that I'm aware of," and did not further comment.

However, Young allowed that "we serve over 90 million-lbs. of food to consumers annually," and added that about a third of sales were fake burgers, a third were fake chicken products, and a third were others, such as fake breakfast sausage.

MorningStar already has an advantage with products such as veggie dogs and nuggets, which currently have little competition on the market, according to Lavery who estimates the company had sales of over $210 million in 2018 and anticipates new products could boost growth by double digits.

For now, Beyond and Impossible's real competition is each other, reported Bloomberg (Aug. 21).

To date, Impossible has raised more than $750 million and is estimated to be valued at $2 billion—a fraction of Beyond's roughly $9 billion market value. Additionally, both companies are chasing the same sustainability-minded consumers who want to have their beef as well as a low-carbon lifestyle.

The companies are often mistaken for one another. They both have Bill Gates as an investor and are led by CEOs named Brown. Despite that, the companies took very different paths to mass market. Beyond went first into Whole Foods and then larger channels such as Kroger and Safeway, whole Impossible was unveiled in restaurants.

At Bareburger, both burgers are on the menu. Impossible outsells Beyond by a three-to-one ratio, according to founder Euripides Pelekanos. Impossible believes heme, its "magic ingredient," is the reason for this, giving the burgers a "metallic meatiness."

Meanwhile, at Beyond, CEO Ethan Brown draws attention to the product's lack of GMOs. "It would make our jobs a lot easier to be able to genetically modify plant material to make it behave exactly as we want," he said. But when the company talked to consumers during samplings "they made very clear to [Brown] what was acceptable he said, noting GMOs and soy were not.

Currently, Beyond has the production advantage, using about 100,000-sq. ft. in two facilities in Columbia, MO, to produce the "core protein-fat matrix" that gets turned into burgers and sausages. Impossible has a single 68,000-sq. ft. plant in Oakland, CA, running similar equipment 24 hours a day, with plans to expand in a partnership with OSI.