Sep 24, 2019
Most Consumers Get Their Cup of Joe from Home
By Victoria Campisi 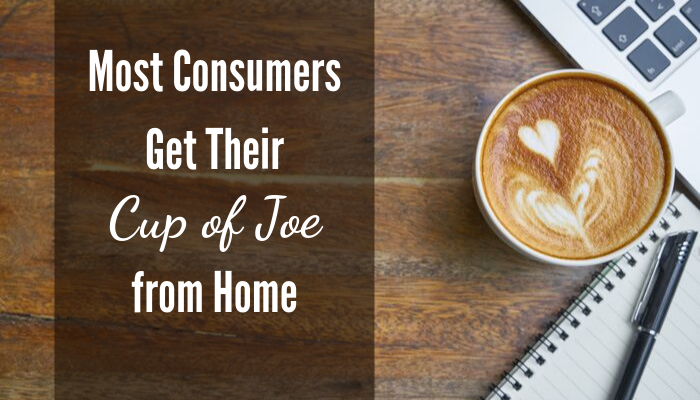 Despite the booming $45.4 billion coffee shop industry in the U.S., Americans are still getting their caffeine fix at home.

Almost 90% of Americans get their coffee from home in an average week, citing convenience, cost and customizability as primary decision-making factors, according to a poll from Reddi-wip. When it comes to how Americans take their coffee, 79% drink it with add-ins, such as coffee creamer, sugar, etc. over drinking it black, and 68% wish they could create their favorite coffee-shop drinks at home.

Eighty-seven percent of those surveyed look forward to making coffee in the morning and 73% of respondents even find making coffee therapeutic.

Although it can be hard to replicate the coffee-shop experience exactly, coffee establishments are making it easier by releasing branded items such as creamers, K-cups and coffee beans, which consumers can use to make their coffee at home. For example, Starbucks launched a line of coffee creamers in July, reported USA Today (July 22). Flavors included store favorites such as cinnamon dolve latte, white chocolate mocha and caramel macchiato.

This was the first time Starbucks entered into the refrigerated creamer category, an industry that's projected to top $7.8 billion by 2023 in the U.S., according to 2018 Mintel data. The creamers were the fourth product Starbucks launched since partnering with Nestle in August 2018, following new lines of coffee beans, Nespresso pods and Nescafe Dolce Gusto capsules designed to appeal to consumers with specialty coffee tastes.

When surveyed about beans, coffee lovers prized freshness first (52%), followed by caffeine (41%) and taste profile (40%), according to a survey by Peet's Coffee and OnePoll. The Peet's survey found that 83% of respondents self-identifying as coffee connoisseurs—comprised mainly of Gen Z, Millennials and Gen X—spend time researching if the beans they purchase are grown and sourced ethically.