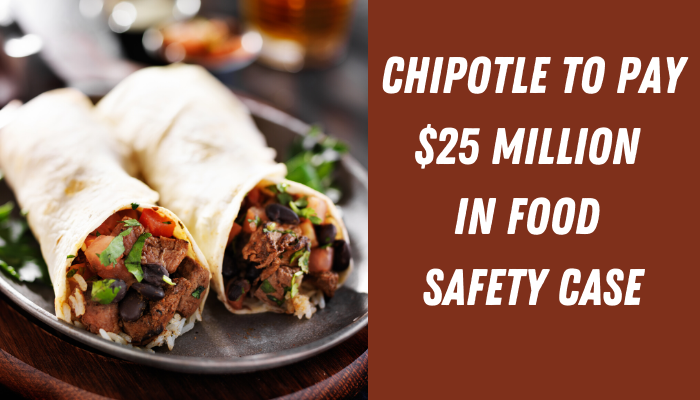 Chipotle Mexican Grill will pay a $25 million criminal fine to resolve allegations by federal prosecutors that its food sickened more than 1,100 people across the U.S. from 2015 to 2018, reported Bloomberg (April 21).

It's the largest fine ever imposed in a food safety case, according the U.S. attorney's office. The charges are in part due to norovirus outbreaks at Chipotle restaurants. Prosecutors allege that four norovirus outbreaks were caused by employees showing up to work sick, in violation of the company's policy, and by food products being stored at the wrong temperatures.

A fifth outbreak, sickening 647 people in July 2018 who dined at a Chipotle in Ohio, was caused by Clostridium perfringens, a bacterium found in raw meat and poultry that is one of the most common types of foodborne illness in the U.S.

“Chipotle failed to ensure that its employees both understood and complied with its food safety protocols, resulting in hundreds of customers across the country getting sick,” said U.S. Attorney Nick Hanna in the statement announcing the deferred-prosecution agreement.

As part of the agreement, Chipotle said it will strengthen its food safety policies and practices. “This settlement represents an acknowledgment of how seriously Chipotle takes food safety every day and is an opportunity to definitively turn the page on past events and focus on serving our customers real food made with real ingredients that they can enjoy with confidence,” CEO Brian Niccol said.

Meanwhile, USDA is currently facing pressure to ensure the safety of the nation's food supply during the pandemic, reported The Hill (April 19). Experts stressed to The Hill that the food supply was safe now, but pointed out the growing challenges for USDA as food industry workers become sick and inspectors have limited resources. The risk from the coronavirus will make it harder for USDA inspectors to continue their work even at operating processing plants.

“It is more important than ever that we assure the American public that government and industry will take all steps necessary to ensure continued access to safe and wholesome USDA-inspected products,” said the agency in a statement.

Despite having to deal with its food safety fine, Chipotle's digital sales more than doubled in March, and same-store sales rose 3.3% in its first quarter, reported CNBC (April 21). Digital sales grew 81% during the quarter and online sales accounted for 26.3% of the company’s quarterly revenue.

The company has been offering free delivery since March 15. It also shifted advertising spending from live sports to more online and streaming platforms.

"We believe these results highlight how much of an asset a strong presence in the digital and delivery channels can be in the current environment and underscore how crucial Chipotle's investments in and around the stage gate process, digital channel, and human capital have been and how much of a differentiator they can be going forward," said analysts at Piper Sandler.

About 100 Chipotle restaurants are temporarily closed due to the pandemic, the majority of those locations being inside malls and shopping centers, as well as 17 European locations. Niccol said that the company would take a restaurant-by-restaurant approach when deciding if dining rooms should be reopened.