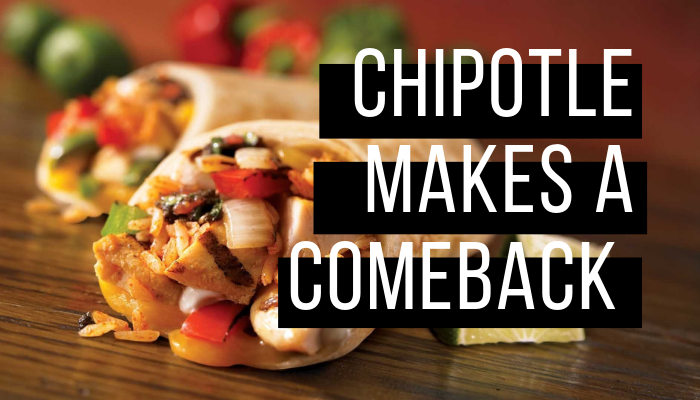 It seems like Chipotle might have finally recovered from its E. coli scandal for the first time since 2015.

Shares of the burrito chain hit an all-time high, reaching nearly $760, reported Business Insider (July 15). This exceeded its last mid-day record of $758.61 in August 2015, just before several instances of customer illness at the chain which caused its stock to lose about two-thirds of its value over two and a half years.

Leading the turnaround is Chipotle's current CEO, Brian Niccol, who previously served as Taco Bell's CEO. Since he joined in February 2018, the company relocated its headquarters, invested in its delivery service and revamped its rewards program.

"We are definitely under a digital transformation at Chipotle," said Niccol.

In March, Chipotle launched its loyalty program, Chipotle Rewards, nationally. Those who enrolled through the company's app or website earned 10 points for every $1 spent, with 1,250 points resulting in a free entrée.

The new tactics are paying off as Chipotle's revenue soared almost 14% in first quarter 2019 and sales at restaurants open at least a year were up about 10%. Digital sales more than doubled and account for about 16% of total revenue.

There may be more menu changes ahead, as some concepts from a 2018 tasting event could appear in 2020, reported Barron's (July 16). The event was hosted by Chipotle at its lower Manhattan test kitchen where it introduced hot-pressed quesadillas, nachos with queso and tostadas as part of a plan to diversify its offerings. However, a year later none of those products debuted nationally.

The company now believes that tweaks to its current menu, such as the Lifestyle Bowls, can be just as effective as new products in getting diners to come in. However, management has hinted that a new steak, carne asada, will be offered nationally later this year.

"What you want innovation to do, in the restaurant business, is to drive people into the restaurant," said Chipotle CMO Chris Brandt. "You almost don't care whether they order it or not.…You're just trying to create news and interest and energy."

"People aren't that adventurous," Brandt noted. He added that when they ask consumers 'What would make you come into Chipotle more?" They often get the response "innovative twists on the familiar."

Although Chipotle is focused on at home recovery and growth potential at the moment, Piper Jaffray believes in long-term potential for expanded international presence through accelerated company-owned development or franchise growth, according to senior research analyst Nicole Miller Regan.

Chipotle expanded into international markets starting in 2009 and now has 16 total units abroad — seven of which are in London.