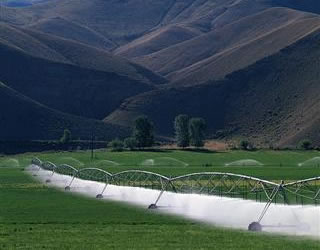 For some, 2015 may be remembered as the year of the drought. For others, it will remind them of the media's obsession with how the drought could raise prices on specific crops, nuts, livestock... and whatever else was the flavor of the day. While overall crop production was hurt by the drought, for the most part, it was largely overstated in the media. In fact, California dodged a bullet this year as crop production remained relatively stable.

The 2015 drought tightened it's grip on the California agriculture sector, costing the state's agricultural economy about $1.84 billion and 10,100 in seasonal jobs. This represents about a 30% increase in lost workers and cropland out of production when compared to 2014, according to the latest drought impact report by the Center for Watershed Sciences at the University of California, Davis. Considering the State's farms and ranches received $46.4 billion for their output in 2013, the drought barely made a dent into the overall agricultural economy within the state.

The researchers at UC Davis did note that the agricultural economy continues to grow within the fourth year of consecutive drought, due in large part to the state's vast reserves of groundwater. The researchers estimated that the declining reserves helped to offset about 70% of the surface water shortage this year, but the effects of continued drought through 2017 could worsen the economic impact by as much as 6%.

Anecdotally, it appears the biggest way the drought has impacted farmers is accelerated growth. Almond farmers note that production is up to 12 days earlier than usual. Pacific Coast Producers noted that the peach harvest in Marysville and Yuba City will end a day earlier than last year in it's latest crop update (Aug. 18). Wine grape growers in the region also report a wide variety of start times, with some pinot noir growers reporting harvests that are early by three weeks. One noted that he usually starts picking pinot noir the first week of September:

"'This year, we’ll be done for sure by the end of August,' he said. 'Which sounds crazy — to finish before we typically start.'"

There's no doubt that California desperately needs rain, and that the long-term economic viability and success of it's agricultural sector will rely upon receiving rainwater to allow groundwater sources to replenish. But the agricultural economy in the state continues to thrive. At least for one more year...