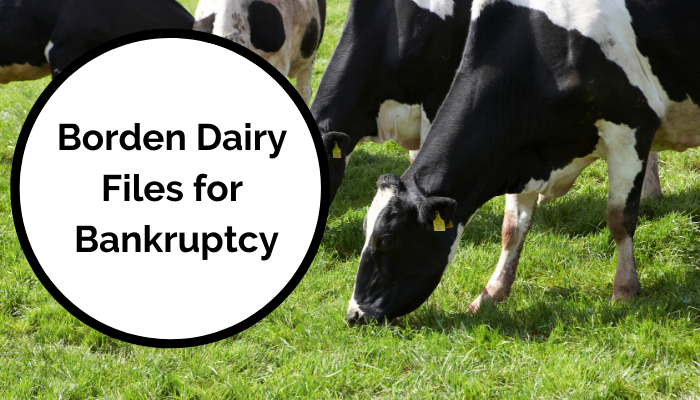 Rising milk prices and other challenges made the company's debt load unsustainable. The filing comes less than two months after Dean Foods Co. filed for Chapter 11 in Houston. The company is considering selling itself to the milk cooperative Dairy Farmers of America.

Conventional milk producers are struggling amid rising milk prices and competition from milk alternatives such as almond, rice, and soy milk.

"The company continues to be impacted by the rising cost of raw milk and market challenges facing the dairy industry," said Borden CEO Tony Sarsam. "Ultimately, we determined that the best way to protect the company, for the benefit of all stakeholders, is to reorganize through this court-supervised process."

Smaller dairy farms are also seeing the effects of these industry-wide challenges and the number of farms with less than 1,000 cows has declined for several years, reported CNBC (Jan. 4). Overall, the U.S. lost nearly 20,000 licensed dairy farms—a roughly 30% decline—over the past decade, according to USDA.

Additionally, between 1992 and 2018, over 94,000 family dairy farms closed their operations at a rate of 10 per day, according to the National Farmers Union.

Family-owned Dutch Hallow Farm in New York has not been growing due in part to declining milk prices pressuring margins and a slowdown in international demand from President Trump's trade wars, according to dairy farmer Nathan Chittenden.

Chittenden watched neighboring farms disappear over the past 20 years, including five farms on his father's side of the family. The margin between the cost of production and selling price has not been enough to make a living for smaller farmers, especially when dairy farms consolidate into industry-dominating operations.

Consolidation in the dairy sector led to larger farms with more cows with a high level of productivity. There was a 13% increase in milk produced per cow from 2009 to 2018 across the country.

Meanwhile, VT-based Kimball Brook Farm, which operated for decades, stopped its dairy production, reported WCAX 3 (Jan 3). Kimball Brook faced stiff competition from other organic dairies and a decline in milk consumption. It could not make enough money to cover debts, according to Cheryl Devos who ran the farm with her husband.

The farm already sold off most of their cows and plans to sell its processing equipment at an auction in March.