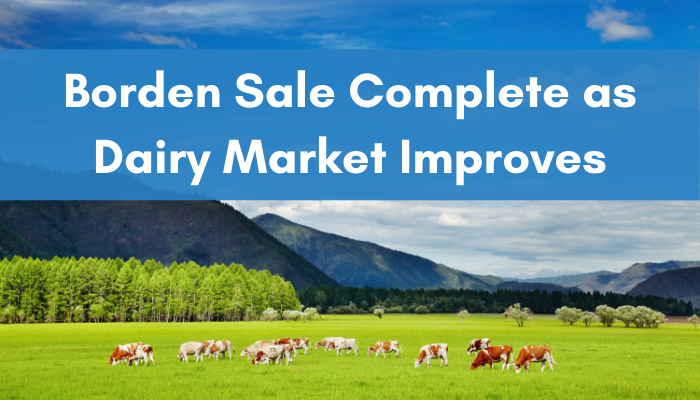 Capitol Peak Partners and its affiliates will acquire substantially all of Borden's assets after completing a court-supervised sale process.

Capitol Peak will assume majority ownership of the new company, while KKR, an existing lender to Borden, will be a minority investor. After the transaction, Borden will be appropriately capitalized and the business will remain intact, including all plants, branches, and routes, as well as the Borden brand.

"Despite being in the midst of Chapter 11 and a global pandemic, our team managed to generate positive cash flow, grow our customer footprint, and maintain an uninterrupted food supply to nourish American families," said Borden CEO Tony Sarsam. "We are exiting Chapter 11 as a thriving company that is meeting and exceeding its performance forecasts, making our outlook very promising."

Borden initiated voluntary reorganization proceedings on Jan. 5 to pursue a financial restructuring designed to reduce its current debt load, maximize value, and position the company for long-term success. The court granted approval on June 26 of the approximately $340 million sale.

Upon closing of the transaction, Borden's former controlling and majority equity holders, ACON Investments and Grupo Lala, will no longer have ownership interest in the business. The transaction, which is subject to certain closing conditions, including the entry of a final order, is expected to be finalized in mid-July. KKR's investment is held by business development companies co-managed by KKR Credit.

As Borden's future looks to be more promising, the dairy market in general also seems to be improving. Milk prices rebounded 100% between April and July, with Class III prices rising above $20 in June from $12.14 in May, reported Farm Progress (June 29).

“The sharp drop in prices in May was the result of the COVID-19 virus shutting down schools, universities, restaurants, and foodservice, which caused a big drop in the sales of milk, cheese, and butter,” said economist Bob Cropp. "Milk production was also at a relatively high level, with March production 2.8% higher than the year before, resulting in more milk than milk plants could handle with the loss of sales."

Dairy farmers had been asked to lower milk production while some were requested to dump milk. “But sales of milk, cheese, and butter have started to improve. Restaurants are reopening, and foodservice sales are increasing," Cropp added. "Restaurants and foodservice needed to place rather big orders of cheese and butter to restock their supplies. With people staying at home, retail sales of milk, cheese, and butter increased.”

As far as how long these milk prices can hold, Cropp noted that a big part of the answer is milk production.

“Hopefully, dairy farmers do not respond to higher milk prices by increasing production again," he said. "We are entering the seasonal low in milk production, during July through September. So, milk production will be declining and hopefully stay below year-ago levels over the next few months.”

USDA will also extend purchases of dairy products under the Food Box Program in July and August, which will be positive for milk sales. Last month, USDA awarded Borden the largest contract through the program as part of the Coronavirus Farm Assistance Program. The contract enables Borden to supply 700 million servings of fresh fluid milk for free to qualifying 501(c)3 organizations across the U.S.