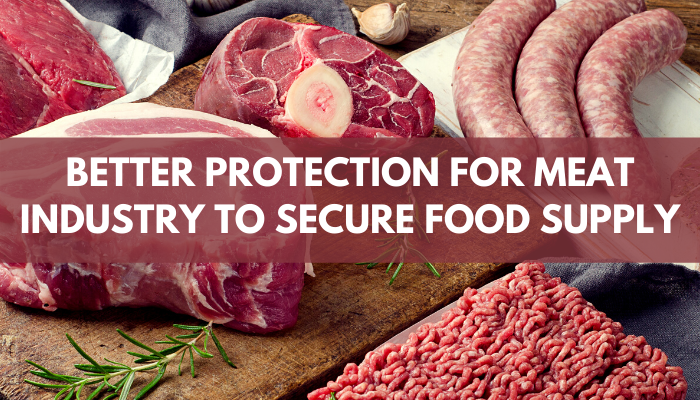 The Department of Labor issued an interim guidance for the meatpacking and processing industries to better protect employees against the coronavirus.

The coronavirus has affected many meat and poultry processing facility workers in the U.S. Although the meat products handled do not expose workers to the virus, close contact with coworkers and supervisors may be contributing to potential exposure.

“As essential workers, those in the meatpacking and processing industries need to be protected from coronavirus for their own safety and health,” said Loren Sweatt, principal deputy assistant secretary of labor for Occupational Safety and Health. “OSHA’s newest guidance document outlines steps employers can take to provide a safe and healthy workplace for workers in the meatpacking and processing industries.”

According to a Washington Post investigation, Tyson Foods, JBS USA, and Smithfield Foods failed to provide PPE to their workers. Employees at a JBS beef processing facility in Colorado claimed that managers encouraged them to report for shifts even when appearing sick.

At an Iowa Tyson plant, local officials and workers said that some employees were using bandannas and sleep eyewear as facial coverings, while others wore no coverings at all. At Smithfield distribution center in Indiana, three workers noted supervisors told them that they were lucky to labor in frigid temperatures where the virus could not survive—despite the science.

Workers at all the facilities said PPE was not promptly distributed. JBS confirmed it did not receive masks for its employees until April 2, and did not mandate use until April 13, while Tyson said it wasn't until April 15 that it started requiring workers to wear masks. Smithfield said masks are universally available to its workers but would not say when they became available. According to workers, it wasn't until the last week or two.

Additionally, a lawsuit was filed against Smithfield, claiming it failed to adequately protect workers at a Missouri plant who were forced to work "shoulder to shoulder" during the coronavirus pandemic, reported Reuters (April 24). The suit alleges Smithfield provided inadequate protective equipment to workers at the plant in Milan, refused to give them time to wash their hands, and discouraged workers who are ill from taking sick leave.

However, JBS, Smithfield, and Tyson are all strongly defending their efforts to protect employees with Smithfield and Tyson saying they started taking preventive action in February and JBS saying mid-March.

Coronavirus outbreaks in more than 30 facilities run by these companies and others have sickened at least 3,300 workers and killed at least 17, according to a review of news reports, county health reports, and interviews with health officials and worker advocates.

Workers becoming sick has potential to affect the food supply chain, according to Tyson, which warned that "millions of pounds of meat" will disappear from the supply chain as the pandemic pushes processing plants to close, reported CNN (April 26).

"The food supply chain is breaking," said board chairman John Tyson. "There will be limited supply of our products available in grocery stores until we are able to reopen our facilities that are currently closed."

Tyson, which employs roughly 100,000 workers, closed its pork plants in Waterloo, Iowa, and Logansport, IN, last week so that workers in those facilities could be tested for the virus.

Meanwhile, USDA's Animal and Plant Health Inspection Service (APHIS) launched the National Incident Coordination Center to provide direct support to producers whose animals cannot move to market as a result of processing plant closures. APHIS’ Coordination Center, State Veterinarians, and other state officials will be assisting to help identify potential alternative markets if a producer is unable to move animals, and if necessary, advise and assist on depopulation and disposal methods.

APHIS will also mobilize and deploy assets of the National Veterinary Stockpile as needed and secure services of contractors that can supply additional equipment, personnel, and services.

Farmers in Maryland and Delaware are preparing to humanely slaughter 2 million chickens due to a shortage of factory workers to process the birds. If action isn't taken the birds will outgrow the capacity of the chicken house that holds them. The organization Save Delmarva Chickens is trying to convince farmers to give the birds to a sanctuary instead of slaughtering them, reported The Wichita Eagle.