May 23, 2018
Augmented Reality, Artificial Intelligence and Virtual Assistants: Oh My
By Chris Campbell 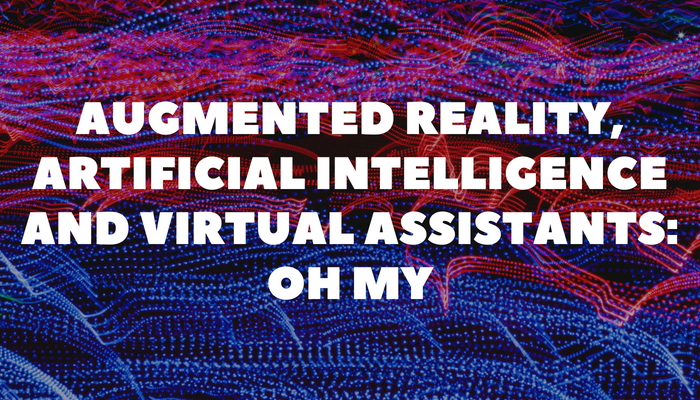 Despite the warnings of Elon Musk, artificial intelligence is on its way. It's not a topic we've shied away from in the Food Institute Blog, either, but a few developments over the past few weeks have inspired me to once again dive into the technology of the future in hopes of determining how it will affect the food industry.

First, we need to talk about Google's reservation technology. The company showcased a new artificial intelligence (AI) feature at its I/O Conference 2018 that can call a restaurant and speak to a human reservationist that sounds about 100% human. The presentation indicated it was prompted by a user's request for a reservation at a specific time. The virtual assistant speaks in a human voice, featuring normal cadence, and can respond to prompts like "hold on" and "just a minute." Google describes it as "a new technology for conducting natural conversations to carry out 'real world' tasks over the phone... For such tasks, the system makes the conversational experience as natural as possible, allowing people to speak normally, like they would to another person, without having to adapt to a machine." The technology is expected to roll out later this year, reported Eater (May 8).

Soon enough, this technology will likely be available on the other side of the line. Instead of consumers speaking with automated messaging services or already-busy employees, a virtual assistant will be able to take down an order, transmit it to an employee (or robot!) and have the food cooked. And then presumably, it will be delivered via a drone. Pardon the levity, but these piecemeal changes will drastically change how foodservice operators interact with their customers.

This technological revolution won't be limited to the foodservice sector, either. Augmented reality (AR) stands to convert many within the retail space. AR will see adoption within the retail sector, but that shift will likely be driven by employees and online shoppers, according to a study from ABI Research. The report indicated an AR experience can be extremely useful for online customers as they are unable to interact with physical products. Additionally, in-store employees can leverage AR for operation efficiencies and increased customer service. ABI forecasts 3% of e-commerce revenue will be generated using AR experiences by 2020. This would equate to $122 billion in revenue worldwide. "The relative ease of integrating AR into existing e-commerce platforms and the impact this can have on the user experience will largely drive customer demand," said Nick Finill, Senior Analyst at ABI Research.

The long and the short of the changes for retail is a further evolution of the omni-channel experience. Today's retailers must contend with a host of technological improvements that are changing the way consumers interact with shops. Consumers now expect omni-channel offerings that include click-and-collect and delivery programs, and retailers that embrace offering convenience stand the best chance to win. Technology can provide customers with a sense of magic by fulfilling orders quickly to a location of their choosing, reported Forbes (May 20).

Even grower-shippers will feel the changes. AI and agricultural robots could allow for more precision spraying of herbicides, which could mean products whose effect has worn off on some weeds could be used successfully in more potent, targeted doses, according to Switzerland-based ECOROBOTIX. The company believes its design could reduce the amount of herbicide farmers use by 20 times. In addition, California-based startup Blue River developed a machine using on-board cameras to distinguish weeds from crops and only administer herbicides where necessary, reported Reuters (May 22).

The number of changes coming are numerous, and it is true that the pace of change is accelerating. However, the road to adoption for these technologies won't be free of challenges and failures. It's unrealistic to believe a company can adapt to all of these changes at once, but by keeping track of the new technologies being introduced, a company has a better chance to continue its success.