May 27, 2020
Most Americans Still Prefer In-Store Shopping
By Victoria Campisi 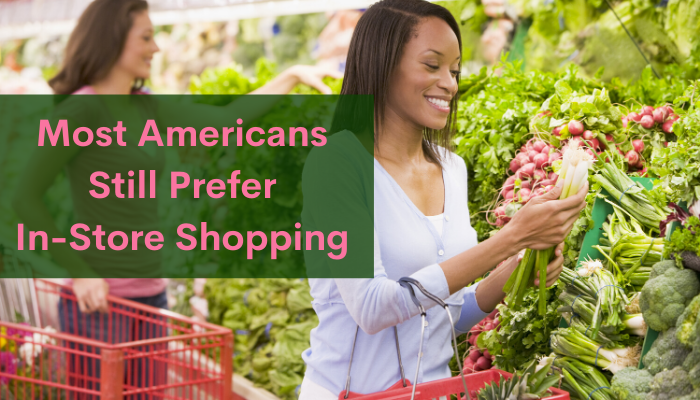 Over one-third of shoppers say they’ll decrease their use of web groceries or stop ordering food online altogether when shelter-in-place restrictions ease in their area, according to a survey conducted for Bloomberg by Civic Science.

Even in cities hardest hit by the pandemic, more than seven in 10 people continued to visit stores for groceries and other essentials, found surveys by McKinsey & Co. In states with more relaxed regulations, the figure is more than eight in 10.

“We’ve already hit the high water mark and people are getting back to some normal habits,” said Kurt Jetta, founder of research firm TABS Analytics. “People really like going to the grocery store.”

In particular, consumers prefer to pick their own perishables, such as produce. Freshness of vegetables and fruits was found to be a concern that could hamper the growth of online grocery shopping, according to Radiant Insights Inc. Additionally, among those who used online grocery pickup services, only half include produce in their orders primarily due to concerns over quality, found Field Agent.

Fresh food is what consumers are most likely to buy in physical stores exclusively after the pandemic, according to research from Evercore ISI. However, items such as bottled water, pet food, and other bulky, nonperishable staples are more likely to continue to be bought online, due to the hassle of carrying them out of stores.

Dollar General is leaning into this by opening two remodeled stores in Baton Rouge, LA, adding fresh fruits and vegetables. The company also plans to add the produce assortment to approximately 400 stores across the country, according to EVP and chief merchandising officer Jason Reiser.

In the UK, as grocery sales rose by 14.3% during the 12 weeks to May 17, shoppers visited the supermarket 3.5 times per week on average, following the relaxation of some government measures the previous week, according to Kantar. Consumers also increased their spend each trip to $33.68. Online shopping now accounts for 11.5% of all grocery sales, attracting more new shoppers in 2020 than the channel has in the previous five years.

Despite a surge in online shopping in the U.S. as well as the UK, it is still questionable if it will stick around. Operations are expensive to run and the shopping experience can be confusing.

“What drove the rapid increase in online grocery’s penetration? It was fear—fear of catching the virus,” said David Bishop, a partner at Brick Meets Click. “Anyone who is rooting for online to stay at this rate, unfortunately, is rooting for the virus.”