May 5, 2020
Most Americans Oppose Reopenings
By Victoria Campisi 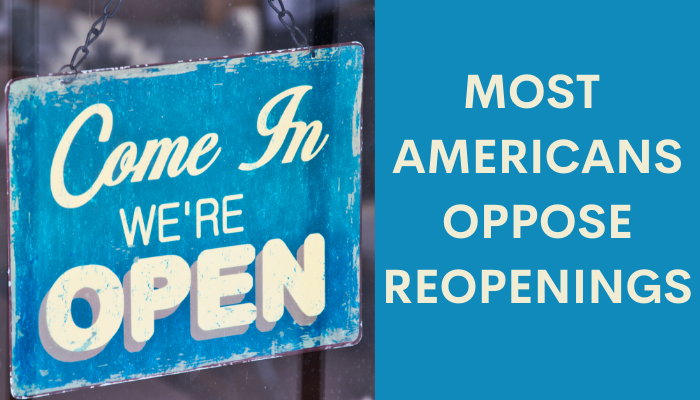 U.S. consumers widely oppose the reopening of most businesses, despite the easing of restrictions in some states.

Seventy-eight percent of Americans would be uncomfortable eating at a sit-down restaurant, according to a poll from The Washington Post and the University of Maryland conducted April 28 to May 3. People in states with looser restrictions reported similar levels of discomfort as those in states with stricter rules.

The opposition displays other cautions and concerns revealed in the survey, including continuing fears among most people that they could become infected by the coronavirus, as well as a belief that the worst of the medical crisis is not yet over.

For example, same-store sales at Shake Shack Inc. fell 12.8% during its first quarter, reported The Wall Street Journal (May 4), with sales improving in recent weeks, according to the company.

In comparison, Texas Roadhouse, a full-service chain, saw same-store sales decline nearly 30% in March and 48% in April, reported Louisville Business First (May 5). However, the company saw a 575% jump in its to-go and curbside business, making more than $56,000 in the last week of April, compared with an average of $8,400 a week in January.

When it comes to retail, the Washington Post-University of Maryland survey found many Americans have been making trips to grocery stores and 56% said they are comfortable doing so.

Grocers and delivery services, such as Instacart and FreshDirect, struggled to ramp up to meet that sudden increase in their demand. Ackerman said the challenges highlighted the need for more investments in infrastructure to speed up order fulfillment, lower costs, and improve the experience for customers.

He noted how some manufacturers are limiting production to popular items and grocers are slimming down their selection of online offerings to have fewer out-of-stock items and substitutions.

“A lot of people are moving towards a place of ‘Keep in stock what you can. Offer less choice, so what you do offer, you can keep on shelf,’” Ackerman said. “That is a very big concern, particularly online where out-of-stocks result in half orders.”