May 1, 2020
How America is Getting Back to Business
By Victoria Campisi 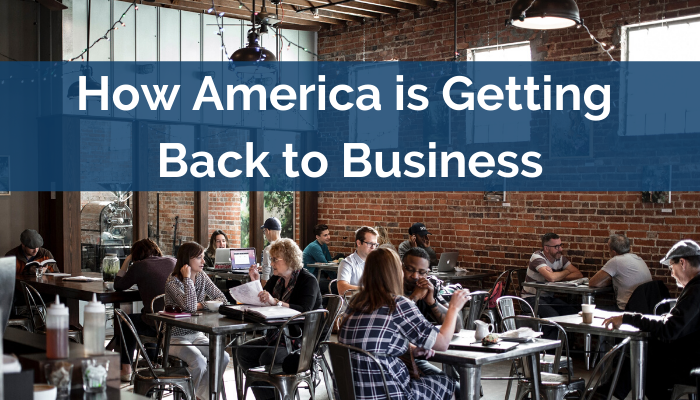 After weeks of shutdown due to COVID-19, several states are slowly beginning to open, and some restaurants are even serving customers again.

However, most businesses are still doing so under restrictions, including lower capacities, health and safety measures, and enforcing social distancing, reported The New York Times (April 29).

In Alaska, Gov. Mike Dunleavy eased restrictions on restaurants, retail stores, and nonessential businesses. The restart comes with certain requirements such as restaurants only permitted to take reservations and seat up to 25% capacity.

Georgia's shelter-in-place measures, effective since April 3, expired on April 30. Gov. Brian Kemp went head-to-head with the White House and local mayors over his decision to reopen large parts of Georgia's economy ahead of other states. On April 27, restaurants could resume limited dine-in service, and movie theaters and other entertainment venues could reopen.

While most restaurants in the state choose not to reopen, a few-including Waffle House and more than 12 other restaurants in the Atlanta metro area-did despite backlash from health officials and users online, reported Forbes (April 27). Many owners that refused to allow dine-in service did so because they felt it was too early or unsafe and others said they were waiting for more guidance from the state.

Restaurants are required to adhere to a set of 39 guidelines laid out by the state government, including a mandate that all employees wear masks, owners screen employees for signs of illness, and restrictions on the amount of customers allowed inside at the same time.

Montana will reopen in phases. It opened retail stores on April 27, while restaurants and bars are expected to reopen in some form beginning May 4.

Oklahoma, among a handful of states where governors did not issue formal stay-at-home orders, reopened restaurant dining, with certain restrictions, on May 1.

South Carolina Gov. Henry McMaster was among the last to issue a stay-at-home order and was also among the first to begin opening his state, starting April 20. The reopening began with retail stores, which can only operate at 20% capacity.

In Tennessee, Gov. Bill Lee announced reopening plans for most counties, starting with restaurants on April 27 and retail stores on April 29, both under restrictions for social distancing.

Florida's Gov. Ron DeSantis said the state would take a "small, deliberate, methodical" approach to reopening by allowing restaurants and stores to operate at 25% capacity starting May 4. For now, the reopening will exclude Miami-Dade, Broward, and Palm Beach counties, which have seen the most coronavirus cases.

Idaho, Indiana, Iowa, Kansas, Maine, Missouri, Nebraska, Nevada, New Hampshire, North Dakota, Ohio, Texas, Washington, and Wyoming all have stay-at-home orders expiring in the next week or so, with some restrictions-or did not have a statewide stay-at-home order to start with, but possessed other restrictions in place that are lifting.

Arizona extended its stay-at-home order to May 15 with some modifications. The state's governor said the goal is to allow dine-in service at Arizona restaurants sometime in May, with May 12 posited as a best-case scenario, reported Arizona Republic (April 29).

For restaurants, guidance included using throwaway menus, single-service condiments, and disposable forks, knives, spoons, and dishes. They should install sneeze guards at cash registers, limit the number of employees on a shift, and avoid having buffets, salad bars, and drink stations.

State and local officials will adopt and enforce the new guidelines. In New York, Gov. Cuomo said each business that wants to reopen must submit a plan to the state on how to do so.

As for retail, Kroger published a guide to creating plans for a safe work environment amid the coronavirus. The company said it continues to learn a lot and believes the actionable recommendations in the first installment of Sharing What We've Learned: A Blueprint for Businesses are suitable for retailers, as well as other industries.

Simon Property Group, the biggest operator of malls in the U.S., came up with a game plan for reopening 49 shopping centers across several states starting on May 1, reported The New York Times (April 28).

Security officers and employees will "actively remind and encourage shoppers" to maintain a proper distance from others and to refrain from shopping in groups. Food court seating will be spaced to encourage social distancing, and reusable trays will not be used.

Darden Restaurants opened most of its 100 establishments in Georgia for dine-in service April 27, with some Tennessee locations opened as well, reported MarketWatch (April 29). All workers are wearing masks, the dining room layouts were changed in order to promote social distancing, and, in keeping with re-opening rules issued by the state, Darden is only serving six parties of six or fewer. It also said tables are disinfected after every guest, there's frequent hand washing among staff, and workers have their temperatures checked before each shift.

Meanwhile, Starbucks expects to begin reopening stores the week of May 3, and it plans to have 90% of its U.S. company-owned locations operating by June, reported CNN (April 29). It is taking a phased approach to reopening, initially with modified operations and shorter operating hours. Drive-thrus will be altered for better efficiency. Additional changes include modifications to the company's delivery channels and a new "entryway hand-off solution." Starbucks is also exploring curbside service at stores where parking is available.