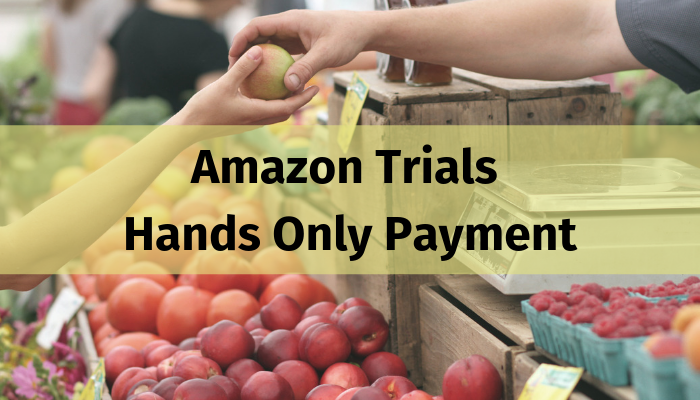 You may be able to leave your credit card, and even your phone, at home in the future when making a purchase at your local grocery store.

Amazon is reportedly testing biometric scanners at Whole Foods Market that can identify individual hands to process a credit card on file, reported New York Post (Sept. 3). Employees at Amazon's New York offices are testing the technology, using it at vending machines to buy items such as soda, chips and granola bars, according to sources familiar with the matter.

The sensors don't even require users to physically touch their hands to the surface. Instead, computer vision and depth geometry are used to process and identify the shape and size of each hand before charging a credit card on file—allegedly processing the charge in less than 300 milliseconds.

The system, code named "Orville," is accurate to within one ten-thousandth of 1%, but engineers are trying to improve it to a millionth of 1% before its launch, according to the source.

Amazon hopes to introduce it at a handful of Whole Foods by early 2020 and eventually to all U.S. locations. If successful, the technology could encourage shoppers to spend more when shopping, according to Majd Maksad, founder and CEO of Status Money, a personal finance site.

"People tend to spend more when they don't have the experience of touching something tangible like money," Maksad said. "The utility of money becomes more ephemeral."

However, not all experts are clear about whether customers will be enthusiastic about scanning their hands. Stephanie Hare, an independent researcher who specializes in technology ethics, pointed out that consumers should avoid giving up their biometric data. Hare warned that if a company gets hacked, it can take six or more years for consumers to unwind the data theft.

"Why would you give them that data? People don't understand the risk, and they're oversold the benefits," she said.

Meanwhile, Amazon is forecast to grow its food e-commerce sales to $15 billion by 2024, according to Edge by Ascential. Amazon and Walmart, the largest grocery retailers in the world, will continue to go head-to-head in the race for global leadership.

"We're going to see a major shift to online and omnichannel over the next few years with grocery," said Violetta Volovich, Associate Analyst and report author for Edge by Ascential. "The barriers to adoption and growth in this sector are coming down, and retailers are investing heavily in technology, supply chain and partnerships that will make for an easy, seamless customer experience."

Four years before COVID, a market analysis report by Grand View Research predicted the global food robotics market would attain a value of approximately $3.4 million, with a CAGR of 13.1% by 2025. COVID has rapidly accelerated the growth of the market to meet consumer needs. Food robots, for instance, cooked, delivered, and served food in places that...