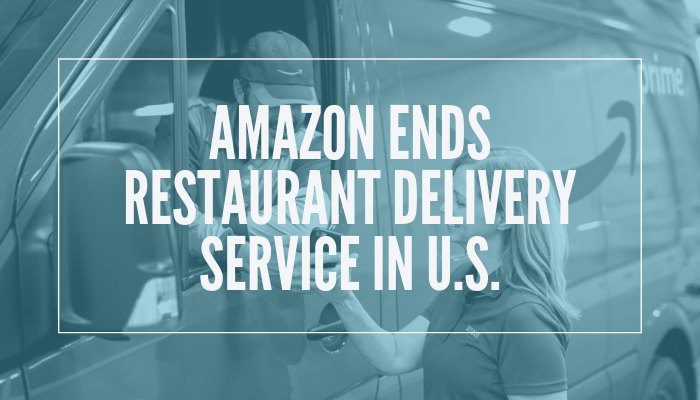 Amazon will shutter its Amazon Restaurants food delivery service in the U.S. on June 24 after operating for four years, reported Geek Wire (June 10).

Amazon restaurants first launched in Seattle in 2015, later expanding to 20 U.S. cities and London. The service allowed Prime members to have meals delivered to their door using its website or through the Prime Now shopping app. Additionally, the company will also shut down its workplace lunch delivery service, Daily Dish, on June 14.

These cloud kitchens change the margin structure of delivered meals by eliminating the cost of the dining/service area, freeing up dollars to pay for the last mile. Brick Meets Click speculated that Amazon would leverage Deliveroo's food production method to create a more profitable "on demand" delivery service that could anchor a profitable order fulfillment system for both restaurants and regularly consumed fresh and packaged products.

The company could build automated micro-fulfillment centers next to the cloud kitchens to handle a selection of fresh and packaged products, as well as create a subscription program within Prime that combines the restaurant-prepared meals and other frequently consumed products. As a result, this would increase its share of household spending from Prime members and other users, give access to purchase/consumption data and expand its digital connections with more households.

In the coming months, Amazon expects to be delivering orders to shoppers' homes by drones, reported The Las Vegas Sun (June 5). The company did not give exact timing or say which locations the self-driving drones will be making deliveries in, however it has Prime Air development centers in the U.S., the UK, Austria, France and Israel, and is testing the vehicles in multiple international locations.

Amazon Prime Air will deliver packages up to five-lbs. in 30 minutes or less. The drones are able to detect and avoid people, pets and laundry clothes lines in customer's backyards when landing, the company said.

Meanwhile, Amazon's brand value jumped 52% in 2019 to $315.5 billion, according to the 2019 BrandZ Top 100 Most Valuable Global Brands ranking by WPP and Kantar. The company's acquisitions that led to new revenue streams, its customer service provision and ability to stay ahead of its competitors by offering a diverse range of products and services are what allowed Amazon to accelerate its brand value growth.

"Amazon's phenomenal brand value growth of almost $108 billion in the last year demonstrates how brands are now less anchored to individual categories and regions. The boundaries are blurring as technology fluency allow brands, such as Amazon…to offer a range of services across multiple consumer touchpoints," said Doreen Wang, Kantar's Global Head of BrandZ.