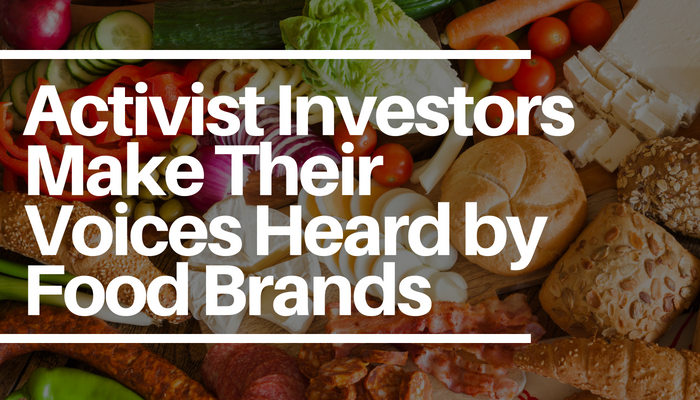 Activist investors have been pretty active these past few days, particularly looking for food companies to sell or restructure their businesses.

Dan Loeb and his firm Third Point have been especially busy, hoping to move the companies they are invested in to make some major changes. On Sunday, July 1, Loeb sent a letter to Nestle reiterating requests he made a year ago to the company, of which Third Point holds a 1.25% share. Third Point wants Nestle to break its business up into three units, beverage, nutrition, and grocery, each with its own CEO, regional structure, and marketing function. In addition, it wants the company to spin off its ice cream, frozen foods, and confectionary businesses and sell part of its 23% stake in L'Oreal, reported Fortune (July 2). Loeb claims this new structure will will streamline the company's "overly complex" structure and will improve "focus, agility, and accountability" to help each part of the business perform better. Additionally, Loeb wants to see an external food and beverage expert added to Nestle's board.

Meanwhile, Nestle responded to the allegations made by Third Point, highlighting several measures it took in the last year to improve shareholder value. Those moves include its deals with Starbucks and Blue Bottle Coffee, which both reportedly had Third Point's support, reported New York Post (July 2). "Through swift and decisive action, the company’s board and management are delivering results," Nestle said in a statement. The company is also reportedly in talks to acquire a majority stake in Canada-based Champion Petfoods.

Also on July 2, New York Post reported Third Point hedge fund is in talks with Campbell's owners and investors about exploring a possible sale of the company, according to people familiar with the matter. Loeb sees Campbell as undervalued, according to another source. In May, Campbell said it would review its strategic plan and portfolio composition, but Loeb is reportedly asking Campbell to drop all other alternatives and focus just on a sale. Sources previously claimed Kraft Heinz and General Mills would be interested in acquiring Campbell's if it does go up for sale.

Third Point is not the only investor looking for a change-up in its investments. Oasis Management called UK-based Premier Foods to sell its Batchelors Soup brand to improve its financial outlook and create funds for investment. Hong Kong-based Oasis predicts selling Batchelors would generate $265 million in proceeds, or more than 60% of the company's current market capitalization, reported Reuters (July 5). Oasis claims, "selling Batchelors would put Premier Foods on a solid footing and strengthen the company for the benefit of all of its key stakeholders including staff, pension scheme members and shareholders in one single swoop." Premier said it held exploratory talks in the past on selling Batchelors, but had not been able to agree a satisfactory price.