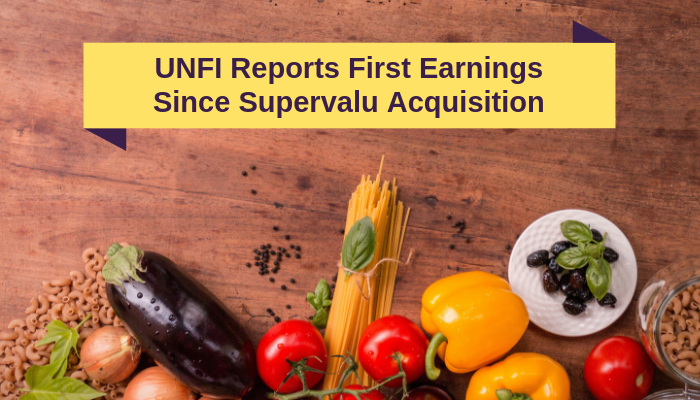 In the first earnings call since the merger, CEO Steve Spinner started by saying the company was "clearly disappointed by the near-term results in Supervalu." However, he followed up by saying that the goal of becoming the premier wholesaler of products and services throughout North America had not changed.

"As we have begun to integrate, our outlook for the combination is stronger than ever," he said. "We have no doubt that the combination of UNFI and Supervalu will translate into more significant value for shareholders than UNFI as a standalone company over time."

He acknowledged the near term difficulties the company faced such as slow sales among Supervalu's retail customers and competition amongst retailers, products being more available from online outlets. Like many other distribution companies UNFI continued to be challenged with higher labor costs and productivity issues related to serving a busy holiday season and the addition of temporary labor where needed.

"While labor costs will persist in the near term, we are confident that productivity will return to more normalized levels as we train new teams and stabilize volume," Spinner said.

As part of UNFI's commitment to selling its retail assets, it recently reached agreement to sell its Hornbacher's banner to Coborn's while securing supply agreements for both Hornbacher's and Coborn's.

Previously, the company announced the sale of all remaining Shop 'n Save stores. Spinner said that while Cub and Shoppers continues to perform in line with company expectations, UNFI will be moving forward with marketing efforts and we are "optimistic that buyers will be found at the right price."

For the first quarter of fiscal 2019, UNFI saw revenue growth as sales increased about 8% in addition to the $224 million that Supervalu added to the quarter during one week that it was part of the company. There were moderate revenue increases in the independent and supermarket channels again driven by a "very tough" macro environment for many retailers.

Spinner said that legacy UNFI gross margins were down about 37 basis points to last year largely driven by continued mix shift towards our lower-margin customers, which was exacerbated by higher levels of supplier out of stocks.

Operating and SG&A expenses, excluding Supervalu, remained flat as a percentage of sales, but increased in dollars due to higher labor costs across the network and higher warehouse turnover increased overtime and lower productivity.

The company is reportedly working hard to stabilize these costs and has seen improvement in recent weeks as new operating best practices have been implemented to balance workload and as they train teams.

Additionally UNFI has begun a process to refresh its Board of Directors making sure to have the right combination of skills and expertise of existing and new board members to "add value to the company for the integration and transformational growth ahead."

CEO of Supervalu Sean Griffin said that since his time with UNFI began, he has been focused on three of key constituencies which are company associates, customers and suppliers.

"Our customers are truly excited about our new company and their newly created ability to purchase a wider variety of products and services from one partner," he said.

In an effort to reduce costs, UNFI's Blue Marble Brands will move into Supervalu's brand structure and offering. Griffin said that in addition to reducing cost it will "unlock cross-selling upside." Albert's Organics has also been merged with Supervalu's produce category under a single head of house.

Griffin said that the reason the company is remaining optimistic about the deal is due to a "rigorous governance process" the company has put in place. The integration process has been broken up into four specific areas that all have an executive sponsor as its lead: foundational, customer, supplier and network. Each will provide regular updates the executive steering committee.